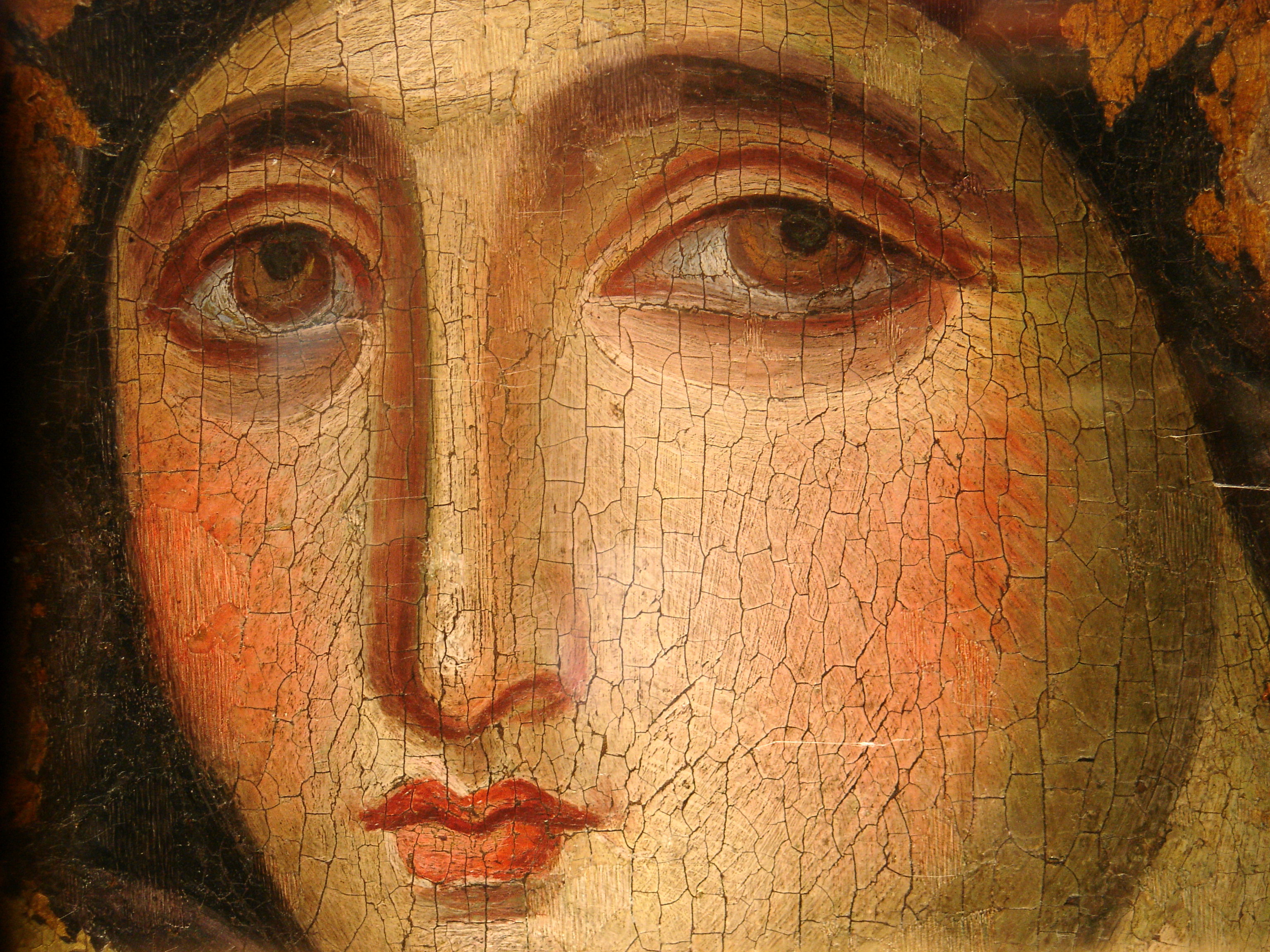 I fell in love.

Editors’s Note: this is post from my blog: Last Lights Off the Black West, which I posted two years ago. I first encountered this icon on Ash Wednesday 2014 and wanted to post it here in preparation for Lent.

I have always loved the Blessed Virgin Mary.  Today, I fell in love with her.

This morning my friend Fr. Daren and I met Mr. Paul Badde at a little cafe not far from St. Anne’s Gate at the Vatican.  From there Mr. Badde took us to the Dominican Convent of the Holy Rosary on Mont Mario in Rome.

Mont Mario is a hill in Rome, though not one of the Seven Hills of Rome.  In ancient times it was outside of the city, located on the western side of the Tiber River and a bit north of the Vatican Hill.  It is recognizable to many who have visited Rome as it is the tallest hill in Rome and there is an observatory on the hill which can be seen from most parts of the city.  It is not often visited as there are many private homes and a beautiful nature preserve (which is not a normal Roman tourist destination.)  It is also held that Mont Mario is the place where Constantine had his vision of the Cross in the sky before the Battle of the Milvian Bridge.

The Convent of the Holy Rosary has ancient foundations but the current church is a baroque building build in 1725.  The convent is home to an order of cloistered Dominican nuns – about 25 of them.  While Mont Mario is not the original location of this particular convent, the convent was founded by St. Dominic himself when he came to Rome, about the year 1220.  It is a beautiful place that, in addition to this wonderful contemplative order, houses significant relics of St. Dominic, St. Thomas Aquinas and St. Catherine of Siena.

It is also home to this icon:

The icon is called in Greek Hagiosoritissa in Italian L’Avvocata or The Advocate.  It is sometimes all called Our Lady of St. Luke.

I have not had time to research this history very deeply as most of it seems to be in either Latin or Italian and is almost completely lost in English.

In brief, it is a treasure.  It is said to have been painted by St. Luke.  The first established Christian community outside of Jerusalem sent a request saying, more or less, ‘hey, you have the Apostles, you have the Virgin Mary, can we at lest get a picture or something?’  Thus, the first images of Jesus and Mary were sent to this place.  When the Muslim conquests began they were sent to Constantinople.  When Constantinople was first threatened, the image of Our Lady came to Rome and was entrusted to the Dominicans.  That is the super short version.

It carbon dates to the first century, so that claim is clear.  There is an extant record of its being brought to Constantinople, so that is clear.  There is also a record of Greek monks bringing it to Rome, so the line is clear.  It is also a unique type of iconography.  Many iconographers have come to see the image and have testified that the method used to make this icon is unique and has been lost to history.  There is more historical detail but, it seems to have the clearest and strongest of all claims to be, if not the original icon of the Virgin Mary, an icon written by someone who knew Mary personally and looked upon her face.

I looked upon that face today and didn’t want to leave.

The eyes of this image pulled me in like nothing I have seen before and filled me with a consolation I have not felt.  it was a window into endless beauty, pureness of love and joy beyond telling.  More to the point, when I looked at and prayed before this icon of Mary, my heart was pulled to love the Eucharist in the Tabernacle like I had never done before.  We prayed the Rosary before this image and all I could think was, ‘I don’t love Jesus enough but I can love Him more and more and more and more and more. . .’  It was a heavenly peace.

In brief, wow!  It is much like the image of Jesus at Manoppello (which I will write about soon.)  How do more people not know about this!

Pope Benedict XVI visited and venerated the image in 2010.  If I was the Pope I would be up there once a week and have that icon in St. Peter’s for just about every Marian feast day there is and twice on Saturdays.

It seems to me that the good God is re-unveiling some of this wondrous images and relics and working many miracles in a time when the world needs it so very much.  St. Faustina is proved true when she talks about the Lord God working  great miracles of the heart in these times.  May He be blessed forever!

As the West declines and the last lights of this once great civilization go off – a bright horizon opens by the work of the Holy Spirit to re-fire Divine Love in souls.

True enough I hope to obtain a doctorate in Liturgy from the Pontifical Institute for Liturgy at the Pontifical Athaneum Sant’Anselm while I am in Rome.  Just as much I hope to help spread the word about these great and holy icons (Manopello and Mont Mario) for I feel that, as He did in the early days of the Church, the good God wishes to use these things to bring people to know the wonder and glory of His Son, Jesus Christ.